Tourism: jobs, the economy and spending

Despite a drop in the number of tourists visiting South Africa, the tourism industry continued to create jobs in 2015. Stats SA’s latest release of its Tourism Satellite Account for South Africa report provides an overview of tourism’s contribution in terms of employment, its impact on the gross domestic product (GDP) and spending.

Currently, one in 22 employed people in South Africa work in the tourism industry, representing 4,5% of the total workforce. In fact, tourism surpasses mining as an employer. The mining industry employed about 462 000 individuals in the quarter ending December 20152.

However, whereas mining contributed 8,0% to the South African economy in 20153, the tourism industry’s contribution was 3,1%4. In other words, for every R100 produced by the South African economy, R3,10 was a result of tourism. This makes the tourism industry larger than the agriculture industry, the latter having contributed only 2,4% to the economy in 2015.

Domestic tourism is the main contributor to total tourism spending, with local travellers having contributed 56,4% (or R140,9 billion) to the total in 2015, compared with international visitors who contributed 43,6% (R108,8 billion). 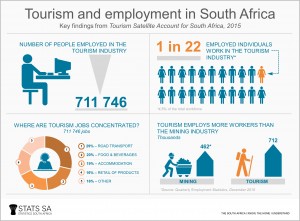