Government education expenditure on the rise

The South African government expenditure on education increased by R20 billion between 2012/13 and 2013/14, based on data from Stats SA’s recent Financial statistics of consolidated general government release.

The primary school phase of schooling sets the foundation for the development of reading and writing skills. Interestingly, the number of individuals (aged 7-13) attending school increased by 0,2% p.a. between 2009 and 2013, according to data from Stats SA’s General household survey2. This is far lower than the 7,3% p.a. increase in spending. This indicates that government is spending more per primary school learner in 2013 than it did in 2009.

Expenditure by level of government 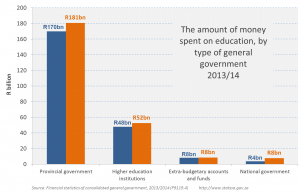 Expenditure by level of education 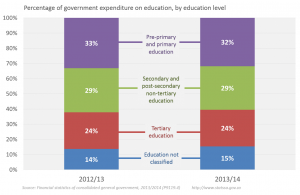 Of the R249 billion spent by general government on education in 2013/14, R169 billion (68%) was spent on compensation of employees. This was followed by purchases of goods and services (R51 billion or 21%) and purchases of non-financial assets (R16 billion or 6%). 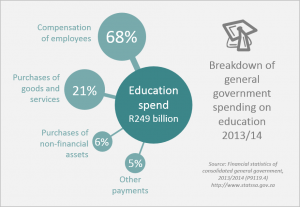 2 View the archive for the General household survey here.