Equal opportunity and equal treatment in the labour market are at the core of decent work. Unfortunately, women in South Africa and around the world still face additional challenges that hinder them from accessing employment. Once they are in employment, appointments to decision-making positions and jobs in certain sectors, or of certain characteristics, remain elusive.
According to the Quarterly Labour Force Survey of the 2nd quarter of 2021, the South African labour market is more favourable to men than it is to women. Men are more likely to be in paid employment than women regardless of race, while women are more likely than men to be doing unpaid work. The proportion of men in employment is higher than that of women; more men than women are participating in the labour market as the labour force participation rate of men is higher than that of women; and the unemployment rate among men is lower than amongst women. The rate of unemployment among women was 36,8% in the 2nd quarter of 2021 compared to 32,4% amongst men according to the official definition of unemployment. The unemployment rate among black African women was 41,0% during this period compared to 8,2% among white women, 22,4% among Indian/Asian women and 29,9% among coloured women. 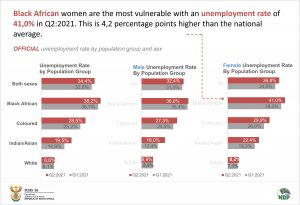 According to the expanded definition, the rate of unemployment among women, at 48,7%, was 8,1 percentage points higher than among their male counterparts in the 2nd quarter of 2021.

Women accounted for 43,4% of total employment in the second quarter of 2021. Of those in managerial positions, 66,9% were men compared to 33,1% of women. Overall, close to a third (30,1%) of all people who had jobs in the 2nd quarter of 2021 were employed in Elementary and Domestic work occupations. Women dominated the Domestic worker, Clerical and Technical occupations while the rest of the occupations were dominated by men. Only 5,5% of Domestic worker jobs were occupied by men while only 11,9% of Craft and related trade jobs were occupied by women.

Decent work is one of 17 Global Goals that make up the 2030 Agenda for Sustainable Development. An integrated approach is crucial for progress across multiple goals. According to the International Labour Organization (ILO), decent work involves opportunities for work that is productive and delivers a fair income; security in the workplace and social protection for families; better prospects for personal development and social integration; freedom for people to express their concerns, organise and participate in the decisions that affect their lives; and equality of opportunity and treatment for all women and men.

Access to social protection is recognised by both the ILO and the United Nations as a basic human right. It is one of the four strategic objectives of the ILO’s Decent Work Agenda. In the 2nd quarter of 2021, men were more likely to have their employers contributing to their pension/retirement fund than women. Just over half (51,3%) of male employees had their employers contributing to their pension/retirement fund compared to 45,8% of women. In relation to entitlement to medical aid benefit from the employer, there were no gender differences between men and women. About a third (31,2%) of both men and women were entitled to this benefit.
Social dialogue plays an important role in advancing opportunities for decent work amongst men and women. It involves all forms of negotiation amongst various role players in the labour market. More than half of the employees indicated that their annual salary increment was determined by employer only – 52,8% of women and 52,3% of men. For 27,5% of male employees, the salary increase was negotiated between the union and employer compared to 22,7% of women. The annual salary was negotiated through the bargaining council for 11,0% of female employees compared to 7,7% of their male counterparts.

In South Africa, gender discrimination remains a major problem in various settings – be it social or economic – including the workplace, the family and educational institutions. The country has made great progress in terms of promoting gender equality. South Africa has a dedicated ministry and legislation devoted to ensuring women’s equality. The National Development Plan (NDP) calls for Local Government to include more women at representative level, as well as in shaping budgetary priorities.

However, women are often marginalised in local politics and excluded from decision-making processes. Women’s participation in integrated development planning is not smooth. The plan calls for the country to have sustained campaigns for non-racialism and gender equity, and advocates against gender violence. It also advocates for public employment to have a specific focus on women.

In terms of economic growth and sustainable development, gender equality is crucial. The 2030 Agenda for Sustainable Development Goals (SDGs) aims to encourage sustained economic growth by achieving higher levels of productivity and through technological innovation. Promoting policies that encourage entrepreneurship and job creation are key to this, as are effective measures to eradicate forced labour, slavery and human trafficking. With these targets in mind, the goal is to achieve full and productive employment and decent work for all women and men by 2030.