According to the Quarterly employment statistics (QES) survey released by Statistics South Africa (Stats SA), the formal non-agricultural sector shed 648 000 jobs in the second quarter of 2020. This brings the total number of persons employed in the formal non-agricultural sector in South Africa to 9,5 million. According to the report, formal sector jobs decreased by 671 000 in the second quarter, year on year. 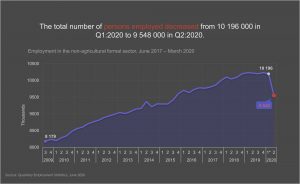 Stats SA staff generally collect QES survey data by email and telephone. During the collection period, Stats SA offices were partially closed and data had to be collected remotely (data collectors worked from home). The inability to reach some respondents during the lockdown period resulted in the response rate for the survey being 82,9 percent, which was about 3 percentage points lower than average. Although the response rate was adversely affected by pandemic-related issues, QES was still able to obtain estimates that met our standards for accuracy and reliability. In anticipation of issues due to COVID-19, QES carefully reviewed estimation and methodological procedures, which included the review of collected data and estimation processes.

Job losses were reported by all industries in the second quarter of 2020 compared to Q1:2020. Losses were mainly due to decreases in employment in the trade industry of 192 000, followed by the business services industry with 147 000 employees and community services with 103 000 employees.

Further employment losses were reported in the manufacturing, construction and transport industries with 85 000, 74 000 and 38 000 jobs respectively. Moderate job losses were observed in the mining industry with 6 000 and electricity industry with 3 000.

Full-time jobs decreased by 541 000 quarter-on-quarter, whilst 568 000 jobs were lost compared to the same period last year. For those who held part-time jobs during the June 2020 quarter, 107 000 part-time jobs were lost, whilst 103 000 jobs were lost year-on-year.
Gross earnings paid for the quarter ended June 2020 decreased by R82 billion (-11,3%) when compared to the previous quarter. The total amount of gross earnings estimated for the quarter was R647 billion. This is down from R729 billion in the previous quarter. 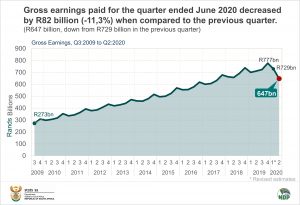 There was a year-on-year decrease of 9,0% in earnings in the current quarter compared with June 2019, amounting to R64 billion.

Average monthly earnings were measured at R21 455 in the formal non-agricultural sector of the economy in May 2020. This is a 4,2% decrease when compared to February 2020, and an annual decrease of 1,6%.