Statistics South Africa (Stats SA) estimates the mid-year population 2020 at 59,62 million in South Africa. Around 51,1% (approximately 30,5 million) of the population is female, while 5,43 million people are aged 60 and over. 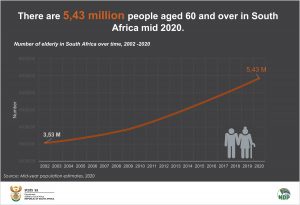 Demography gives us an awareness of the fact that we live in increasingly aging populations. In South Africa, the growth rate among the elderly (60 years and older) rose from 1,1% for the period 2002–2003 to 3,0% for the period 2019–2020. Vulnerabilities evident in this age group range from the need for social assistance programmes and easy access to cash transfers to food programmes and access to health care. With the challenge of the recent COVID-19 pandemic, we need to focus our attention on protecting our elderly.

Developed countries that have, on average, an older population, experienced significantly higher numbers of COVID-related deaths among their elderly. However, developed countries also have better functioning health systems. Although the health burden may be greater in developed countries due to their age profile, they have a greater ability to meet it. South Africa, recognising its vulnerabilities, immediately responded with a lockdown to curb the spread and flatten the curve to provide health care systems the opportunity to prepare themselves to deal with the pandemic.

In South Africa, population estimates indicate that the proportion of elderly persons (60 years and older) has grown from 7,6% in 2002 to 9,1% in 2020. In recent years, South Africa has moved from a country suffering mostly mortalities from communicable diseases such as tuberculosis and HIV/AIDS – which are often concentrated at younger ages – to scenarios where most causes of death are attributable to non-communicable diseases, manifesting at late ages, such as strokes or heart disease (MCOD, 2017).

By 2020, life expectancy at birth improved to 62,5 years for males and 68,5 years for females. These gains can be lost if, over time, the deaths due to COVID-19 are not curbed with effective treatment protocols and a vaccine. 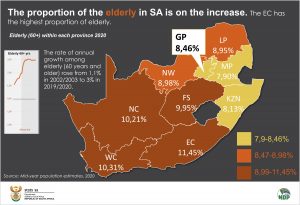 Imperatives such as Agenda 2063 and, more locally, the National Development Plan (NDP) of South Africa, are vital in protecting the growing proportion of vulnerable elderly persons in the country. Policies targeting their social, economic, and general well-being (particulaly in the time of the COVID-19 crisis) are imperative. Stats SA’s mid-year estimates provide data that inform policies surrounding the NDP and its targets.