In 2015, the South African population was estimated at 55 million people, of which 19,7 million were children aged less than 18 years (0–17). According to a new report released by Statistics South Africa, Child poverty in South Africa: A Multiple Overlapping Deprivation Analysis, more than 6 out of 10 (62,1%) children aged 0–17 years were multidimensionally poor.

Children experience poverty very differently from adults because they have to depend on others to meet their needs. They rarely have control over household finances and they usually don’t have the power to make decisions for their day-to-day lives. As such, child poverty needs to be measured differently from the rest of the population.

The monetary approach to poverty has traditionally been used to identify poor children. A child is identified as poor if he/she lives in a household whose income or expenditure is below a given poverty line. Even when a household has an adequate level of income they may not necessarily redistribute the resources appropriately within the household according to the specific needs of each of its members. Since children are not the decision-makers in the household, this is of significant importance.

While money is only one dimension of poverty, especially for children, what is multidimensional child poverty? A child is said to be multidimensionally poor when they are living in households where they are deprived of at least three out of seven dimensions of poverty (Health, Housing, Nutrition, Protection, Education, Information, Water and Sanitation).

Child poverty and deprivation hinders the physical, psychological and social development of a child. Children who experience multidimensional poverty will miss out on key aspects of their life which usually help them develop and reach their full potential, including an education, easy access to clean water, access to health care and a sense of feeling safe. Even if they are not experiencing monetary poverty, they may be deprived in many other dimensions which will impact the rest of their lives.

Given that the needs of children differ depending on their age, children will experience different dimensions of poverty depending on their age at that point in their lives. The three main contributors to the state of poverty of children in the early childhood development phase (0–4 years) were their housing circumstances; water, sanitation and waste disposal; and health circumstances. On the other hand, education, housing circumstances as well as water, sanitation and waste disposal dimensions were the three main contributors to the poverty situation of children in the primary childhood development phase (5–12 years) and children in the adolescence phase (13–17 years). 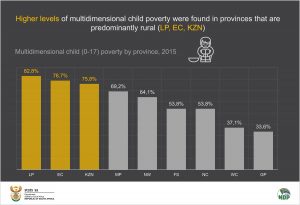 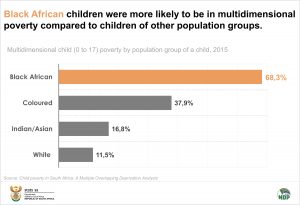 Addressing child poverty needs to be a national policy priority to ensure a better life and opportunities for all in the future. The measurement of child poverty and the understanding of its dynamic nature is of crucial importance to guarantee that relevant, effective and sustainable policies and strategies geared towards breaking the revolving cycle of poverty are put in place. Traditionally, in most developing countries, the measurement of child poverty is based on household income or consumption levels to evaluate the extent to which children’s needs are realised. Helping decision-makers to understand child poverty will assist in developing planning interventions and policies that are more effective in targeting and revealing the most deprived children in our country.

To find out more about child poverty in South Africa, download the full report here.