The South African economy recorded its third consecutive quarter of economic decline, falling by 2,0% (seasonally adjusted and annualised) in the first quarter of 2020.1 This followed a contraction of -1,4% and -0,8% in the fourth and third quarters of 2019, respectively.

The results presented here cover the period 1 January 2020 to 31 March 2020, which includes the beginning of the COVID-19 lockdown in South Africa and some of its trading partners.

Mining and manufacturing were the most significant contributors to the economy’s poor performance in the first quarter. Mining activity slowed by 21,5%, the biggest slump in six years. Iron ore, manganese and chromium were the biggest drags on mining growth, offsetting positive gains made by coal, diamonds and platinum group metals. 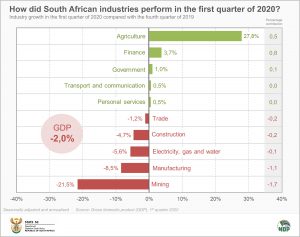 Economic activity in the manufacturing industry decreased by 8,5%, its third consecutive quarter of negative growth. The contraction was mainly due to decreases in the production of petroleum products, metals and machinery, and transport equipment. Lower demand and maintenance stoppages contributed to the industry’s poor showing in the first quarter.

Construction registered its 7th consecutive quarter of economic decline, slipping by 4,7%. This was due to decreased activity relating to construction works as well as the construction of residential and non-residential buildings.

With the exception of retail, all other activities in the trade industry (food and beverages, wholesale, motor trade, and accommodation) recorded a decline in economic activity. Overall, the industry shrank by 1,2% in the first quarter.

Five industries made a positive contribution to GDP growth. Both personal services and transport and communications grew by 0,5%. Government activity edged up by 1,0%, partly the result of an increase in employment within provincial government and higher education institutions. The finance industry expanded by 3,7%.

The agriculture industry recorded a particularly good quarter. A rise in the production of field crops, horticultural products and animal products boosted activity by 27,8%. This was underpinned by favourable weather conditions and a rise in agricultural exports.

Stats SA also measures the expenditure side of GDP, reflecting the demand side of the economy. Included are measures of household spending, government spending, investment spending (gross fixed capital formation and changes in inventories), and net exports.

Expenditure on GDP in the first quarter decreased by 2,3% (seasonally adjusted and annualised), dragged lower by investment spending and drawdowns in inventories.

Investment spending (gross fixed capital formation) decreased by 20,5%, the biggest fall since the 2008–2009 global financial crisis. This was influenced in part by declining investments in computer equipment, computer software and transport equipment. 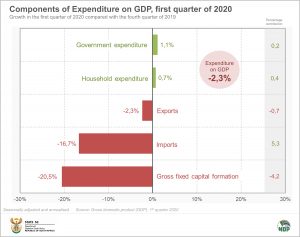 Increased mineral product exports contributed to the drawdown of inventories in the first quarter (there was a fall in mining production). Throughout the economy, inventory drawdowns amounted to R67,3 billion, with large drawdowns also recorded for manufacturing and trade.

Consumer spending remained positive in the first quarter, with household consumption expenditure increasing by 0,7%. Households spent more on food and non-alcoholic beverages and household furniture and equipment, but held back on clothing, transport and restaurants. Spending on clothing and footwear decreased by 8,1%.