Statistics South Africa (Stats SA) has embarked on a series of three online web-based surveys to measure the impact of the COVID-19 pandemic on individuals in the country to assist government and other stakeholders in their response to the crisis. The second round of the survey (Wave 2) focused on employment, income and hunger-related issues for persons residing in South Africa who are 18 years and older.

Data collection for Wave 2 occurred during the sixth week of the national lockdown between 29 April and 6 May 2020. The survey used a non-probability, convenience sample and received responses from 2 688 individuals, roughly half coming from persons living in Gauteng. While the survey results are not representative of the entire South African population, they are indicative of the types of challenges facing South Africans during these unprecedented times. 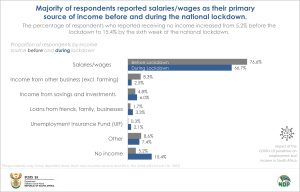 Roughly three out of every four respondents (74,9%) whose income reduced reported that they had reduced their spending to compensate for the loss of income, while about half of those respondents (51,7%) indicated that they accessed their savings to close the income gap. Roughly one in three respondents (36,8%) also relied on extended family members, friends and/or their communities for support. Claims from the Unemployment Insurance Fund (UIF) was used by 14,6% of these respondents as coping mechanisms.

In terms of spending, the Wave 2 survey found that 19,5% of respondents said that their spending was about the same before and during the national lockdown. However, more than one-third of respondents (38,6%) reported that they were spending less per week during the lockdown compared to their weekly spending behaviour before the national lockdown, while another one-third (35,8%) indicated that they were spending more per week.
With regard to hunger, the proportion of respondents who reported experiencing hunger since the start of lockdown increased from 4,3% to 7,0%. Based on the General Household Survey1 (GHS) data, we know that hunger in the country is notably higher than as measured in the Wave 2 survey results which reflects the possible selection bias in Wave 2 respondents. Nevertheless, the reported increase in hunger amongst respondents is indicative of the risk of greater food insecurity in the country as a result of the COVID-19 pandemic.

When examining the subset of respondents who reported that their income has decreased since the start of the national lockdown, we actually find higher levels of hunger with roughly 11,4% of those respondents (roughly one out of every ten) reporting that they have experienced hunger during the lockdown.