During the 7-year period before the South Africa Demographic Health Survey (SADHS) 2016, the pregnancy related mortality ratio was 536 pregnancy-related deaths per 100 000 live births. For every 1 000 live births, about five women died during pregnancy or within 2 months after childbirth (SADHS, 2016). While South Africa has made significant progress with regard to the improvement of maternal health and the reduction of maternal mortality in the last two decades, most maternal deaths are preventable.

According to “Maternal Health Indicators: Further Analysis of the 1998 and 2016 South Africa Demographic and Health report”, released by Statistics South Africa, maternal healthcare utilisation has increased significantly between 1998 and 2016. Nationally, deliveries in a health facility increased from 83,4% in 1998 to 96,7% in 2016. Home deliveries decreased from 14% in 1998 to 4% in 2016. 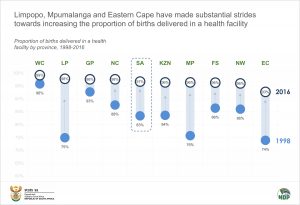 The World Health Organization (WHO) reports that in high-income countries, virtually all women have at least four antenatal care visits, are attended by a skilled health worker during childbirth, and receive postpartum care.1 According to the report, the proportion of women with four or more antenatal visits was much lower amongst women with no education (69,3%) in 1998 and women with primary education (69,8%) in 2016 than those with higher education levels.

A skilled health provider assisted in nearly all deliveries (97%) in South Africa. An increase in the proportion of births delivered in health facilities was observed amongst rural women in Eastern Cape, Limpopo, and Mpumalanga. 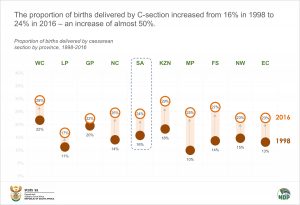 The days and weeks following childbirth (the postnatal period) are a critical phase in the lives of mothers and new-born babies. Most maternal and infant deaths occur in the first month after birth (WHO, 2013).

In South Africa, 84% of mothers had a postnatal check within the first two days after the birth, while 16,4% did not receive any postnatal check. By province, Western Cape and Free State have the highest proportions of women who received a timely postnatal health check (91% each), while KwaZulu-Natal has the lowest percentage (80%).