For most women, the news that they are expecting a baby is a happy event filled with excitement in anticipation of the arrival of their bundle of joy. However, not all births are “wanted”.

A recent report by Statistics South Africa entitled Unwanted Fertility in South Africa reveals that about 20% of all births in the five years preceding the 2016 Demographic and Health Survey  (including pregnancies at the time), happened when women were not planning on having any more children. The term “unwanted” means that no additional birth as recalled at the time of conception was wanted.

The report uses data derived from the South Africa Demographic and Health Survey (SADHS), 2016 and 1998. Women were asked about the planning status of each birth they had in the preceding five years. Typical questions asked in the surveys are: “At the time you became pregnant with [name] did you want to become pregnant then, did you want to wait until later, or did you want no more children at all?” 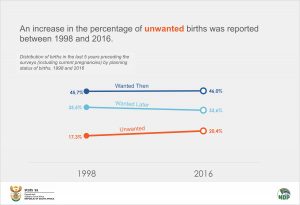 Older women experienced higher percentages of unwanted births compared to younger women. Approximately 54% of births to women born between 1965 and 1969 were conceived when women were not planning on having any more children; these births were approximately 47% amongst women born between 1970 and 1974. In 1998 and 2016 approximately 12,5% and 14,8% of births to mothers aged younger than 20 were unwanted; this reached a high of 35,3% and 45,5% for births to mothers aged 40–44.