Inflation the lowest in over eight years

Annual consumer inflation continued its downward streak, dropping to 3,7% in October from 4,1% in September. October’s reading is the lowest since February 2011 when the annual rate was also 3,7%.

Consumers can breathe a sigh of relief at this news, as the prices of many goods and services are increasing at a much slower rate, and some prices have actually fallen. Most notably, fuel prices were down by 4,9% in October 2019 compared with the same month last year. In October 2018, the price of inland 95-octane petrol increased by R1 to R17,08 per litre. By October 2019, the price was down to R16,21 per litre.1

The main contributors to the annual increase of 3,7% were food and non-alcoholic beverages with annual inflation at 3,6%, housing and utilities at 4,8%, and miscellaneous goods and services at 5,7%.

October’s inflation rate may be the lowest in over eight years, but it’s not the lowest on record. Inflation fell to an astounding -0,3% in August 1954, the lowest reading on record since 1950. A rate below zero per cent is an indicator of deflation. This is when the price of a good or service is not rising but in fact falling over time.

Inflation hit its lowest point in the democratic era in January 2004, coming in at 0,2% (click on the image to enlarge). 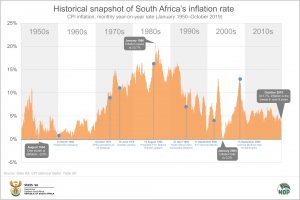 South Africa’s inflation rate has been through a roller-coaster ride since 1950. In the 1970s, inflation started out the decade at 3,6%. Over the next ten years, political instability at home and the onset of an international oil crisis contributed to a challenging economic environment. By December 1979, inflation was reported at 14,0%.

The upward trend continued in the 1980s. Burdened by sanctions and economic decline, the country saw inflation skyrocket to 20,7% in January 1986. The most painful month in the democratic era was August 2008, when annual inflation hit a high of 13,7%.