This followed a 0,7% drop in 2016, according to Stats SA’s recent Financial statistics of higher education report.1 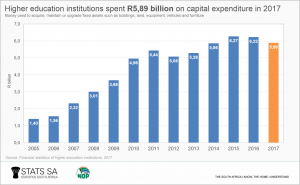 Capital expenditure is money that an institution spends to acquire, maintain or upgrade fixed assets such as buildings, land, equipment, vehicles and furniture. These assets generally increase the capacity and efficiency of the institution, and usually have a life span of longer than a single accounting period. The amount that an institution spends on fixed assets shows the extent to which it’s investing in the long term.

In terms of higher education, the 5,4% drop in 2017 was largely a result of decreased spending by the University of the Witwatersrand (Wits), the University of South Africa (Unisa) and the Walter Sisulu University. These three institutions spent less on buildings, transport equipment, office furniture and other machinery and equipment.

Who were the biggest spenders on fixed assets in 2017? The University of Pretoria took the lead, contributing R738 million (or 13%) to total higher education capital expenditure. Stellenbosch University and the University of Mpumalanga took second (10%) and third (9%) spots, respectively.

The bulk of capital expenditure (63%) was directed towards the construction and maintenance of buildings such as laboratories, lecture halls and residences. The second most important item was furniture, taking up 14% of the R5,89 billion (click on the chart to enlarge). 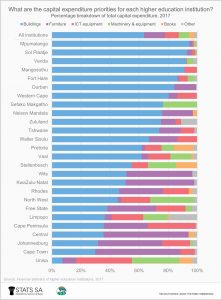 The decrease in overall capital expenditure can be attributed to various reasons. Wits, for example, indicated that it had reduced capital expenditure in order to conserve money for increased maintenance costs. The institution would also redirect any surplus cash towards its insourcing programme, the process of absorbing staff that were previously employed by third-party contractors.3