How much does SA business spend on its employees?

About 14% of total spending, according to recent figures. A quick review of the data shows that this proportion has remained relatively stable over the last decade. In the second quarter of 2009, employment costs contributed 15% of total expenditure in the formal business sector. Although there hasn’t been a major change over time for the sector as a whole, there are notable differences between industries.
Let’s take a look at the breakdown of total spending.
The formal business sector1 spent a total of R2,39 trillion in the second quarter of 2018, according to the latest Quarterly financial statistics (QFS) report (excluding capital expenditure). A rundown of the expenditure data, collected from a sample of about 4 500 businesses, shows that 60% was spent on purchases of goods such as raw materials, consumables, goods for resale, fuel and building materials. 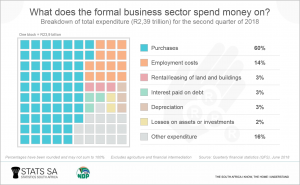 How do employment costs differ across industries? 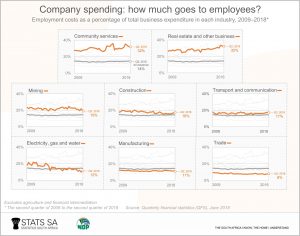 Why the relatively high contribution to employment costs? Activities taking place within these two industries are often focussed on selling intellectual knowledge rather than physical goods. As a result, purchases contribute relatively less to total spending.

On the other side of the coin, notice the low contributions of employment costs in industries such as trade and manufacturing. Think of the factory that requires large amounts of raw material or the corner café that requires stock to fill its shelves. These industries spend a higher proportion on goods and materials.

You might be wondering how this all compares with government. If the formal business sector spends 14% of its budget on its employees, what is the current situation in the state? The proportion is much higher. The South African government spent 41% of total expenditure on employee-related costs in 2015/16, according to Stats SA’s latest Financial statistics of consolidated general government report.2 In 2009/10, the proportion was also 41%.