Public-sector capital expenditure shrinks for the first time since 2010

Capital expenditure is money that an institution spends to buy, maintain or upgrade fixed assets, such as buildings, vehicles, land and equipment. A decline in spending on fixed assets by 360 of the 751 public-sector institutions1 saw total capital expenditure fall from R283,3 billion in 2016 to R271,2 billion in 2017 (click on the chart to enlarge). 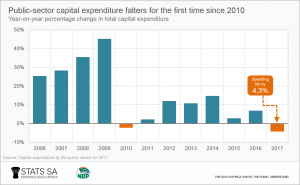 Transnet, which operates the country’s fuel pipelines, trains and ports, was a major contributor to the 4,3% decrease. The corporation spent R8,2 billion less on fixed assets, a fall from R33,6 billion in 2016 to R25,4 billion in 2017.

The National Department of Water Affairs and the Water Trading Entity were the second and third largest contributors to the decline in public-sector capital expenditure. The Department of Water Affairs scaled back on the maintenance of conveyance systems while the Water Trading Entity spent less on the construction of dams, sewerage pumps and water generators. Together, both institutions reduced capital expenditure by R4,4 billion. In fact, the nine water boards covered in the report indicated a 19% decline in total capital expenditure in 2017 compared with 2016. 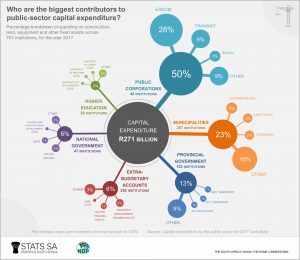 South Africa’s 257 municipalities were responsible for 23% of total public-sector capital expenditure, with Johannesburg, Cape Town and eThekwini the largest contributors. New construction works represented the bulk (84%) of total municipal capital expenditure. eThekwini, for example, spent R4,9 billion on the construction of the Integrated Rapid Public Transport Network and rehabilitation of various roads within the city.

The KwaZulu-Natal Department of Transport was the largest contributor to provincial government capital expenditure. The department spent R3,5 billion on new construction, focussing on upgrading roads in areas such as Ulundi, Umzumbe, Maphumulo and AbaQulusi.

Higher education institutions, which comprise the country’s universities and universities of technology, contributed the least to total public-sector capital expenditure. The University of Stellenbosch, the biggest spender within this group, focused on upgrading lecture rooms and offices.