How do women fare in the South African labour market?

The South African labour market is more favourable to men than it is to women and men are more likely to be in paid employment than women, regardless of race.

According to the Quarterly Labour Force Survey released by Statistics South Africa, the official unemployment rate has been relatively high since 2008. In the last decade, the rate has increased from 23,2% in the first quarter of 2008 to 27,2% in the second quarter of 2018. 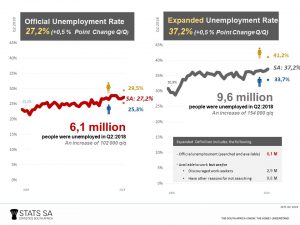 As we approach Women’s Month, it is important to celebrate what women have achieved since 9 August 1956, when more than 20 000 women marched to the Union Buildings in protest against the unjust pass laws imposed on women in South Africa. Even though women are far better off today, it is important to know if they are making inroads towards furthering their careers.

Although South Africa has made great strides, gender representivity is still below the 50% mark for positions that come with a great deal of influence. According to data from the report Gender series volume I: Economic empowerment, 2001–2014, women comprised 32% of Supreme Court of Appeal judges, 31% of advocates, 30% of ambassadors and 24% of heads of state-owned enterprises.1 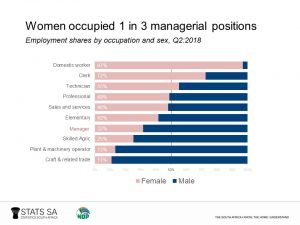 Women accounted for 43,8% of total employment in the second quarter of 2018. Only 32% of managers in South Africa were women. Women dominated the Domestic worker and Clerk or Technician occupations, with men dominating the rest. Only 3,0% of Domestic worker jobs were occupied by men while 10,9% of Craft and related trade jobs were occupied by women.

The labour market position of women hasn’t changed much over the last decade; in fact, it has deteriorated in some respects.

1 Women in Power: what do the statistics say? (read here)