South Africa’s consumer inflation rate jumped to 4,5% in April after reaching a seven-year low of 3,8% in March. Much of the increase was a result of price rises in product groups that attract specific taxes, namely alcohol, fuel and sugary drinks.

A one percentage point increase in value added tax (VAT) also came into effect in April. The exact impact on inflation is not yet entirely clear in the data, since VAT is not paid on all goods and services, and the introduction of the higher rate is being treated differently by providers.1

Motorists in particular have felt the pain. The price for inland 93 octane petrol increased by 69c/l in April, of which 52c was a result of tax increases.2 Fuel prices in general have risen by 9,0% over the past 12 months, placing fuel as the number 1 product (on par with meat) with the highest year-on-year price increase. 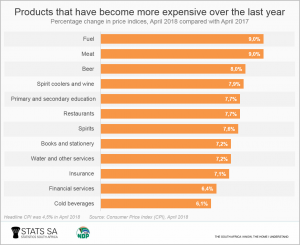 Those who enjoy their alcoholic beverages have also felt the pinch. Excise taxes on alcohol and tobacco, which came into effect in February, are slowly permeating the market as retailers fill their shelves with new stock. Prices for alcoholic beverages climbed by 1,2% in March 2018 compared with February 2018, according to the inflation data, followed by a further 1,6% increase in April. Beer experienced an annual price increase of 8,0%.

Whiskey and brandy connoisseurs can breathe a little easier, but not by much, as they are paying 7,6% more for spirits than they did a year ago.

The new Health Promotion Levy or ‘sugar tax’ on cool drinks came into effect in April at a rate of 2,1 cents per gram of sugar content exceeding 4 grams per 100ml.3 Newspaper articles reported predictions that the tax would raise the price of a can by approximately 11%.4,5 Prices recorded by the CPI in April show average increases of 4,5% for a bottle and 5% for a can of carbonated soft drinks.

Interestingly, cell phone fees increased by 2,6% in April. This index normally shows very little movement and this is the largest monthly increase since 2008 when Stats SA started recording the prices of cell phone fees.

Despite all this sombre news, there were items in the inflation basket that experienced a fall in price over the last 12 months. Fruit prices, for example, fell by 8,2%. Other items that are now cheaper than they were a year ago include bread & cereals (-3,7%), desserts & sweets (-1,5%), and oils & fats (-1,0%).

1 Information on how Stats SA is measuring the change in prices due to the rise in VAT is available here.

2 The prices for fuel, published by the Department of Energy, are available here.

4 BusinessTech, How much more the average cooldrink will cost with SA’s new sugar tax (read here).