The formal business sector, excluding agriculture and financial intermediation, generated R2,3 trillion in turnover during the second quarter of 2017, i.e. the months of April, May and June. Who was responsible for generating this amount?

According to the report, the trade sector is the largest player in the business landscape, contributing 36% to the R2,3 trillion. Manufacturing takes second place, followed by business services (click on the image to enlarge). 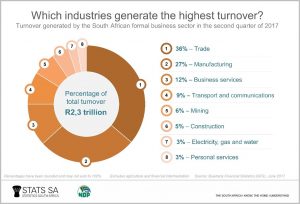 But simply taking turnover on its own as a measure of commercial success doesn’t provide a complete account. As in all areas of life, costs are inevitable, eroding any turnover that is generated.

The two largest expenditure items faced by South African businesses are purchases, taking up 61% of total spending, and employment costs (14%). Other items measured (including interest on debt, hiring of vehicles and machinery, royalties, and renting of buildings) contribute about 10%. The miscellaneous category, referred to as “other expenditure”, is responsible for the remaining amount.

After all this spending, including tax and adjustments for inventories, the R2,3 trillion in turnover generated by the South African business sector was whittled down to R256 billion. This is profit earned after tax.

Simply knowing how much profit was generated doesn’t provide us with a full indication of business performance. Context is required, and this is achieved by using a handy accounting measure called the profit margin ratio.

By comparing two or more financial values where a relationship exists, accounting measures allow the analyst to dig a little deeper into the financial data.

The profit margin ratio is calculated by dividing the profit or loss after tax by total sales or turnover. Simply stated, the ratio indicates how much of each rand earned by the industry in turnover is translated into profit.

Overall, the South African business sector earned 11 cents of profit for every rand of turnover generated in the second quarter of 2017.

As mentioned earlier, trade earned the bulk of total turnover. In terms of profit margin, the industry was ranked fifth in the second quarter of 2017, at 4 cents for every rand of turnover generated. Business services took the top spot as the industry with the highest profit margin ratio, followed by personal services, manufacturing and transport. Construction was in sixth place, with 2 cents of profit for every rand of turnover generated.

The electricity, gas and water supply industry, as well as mining, experienced losses, however. For electricity gas and water, it was the third consecutive quarter in which the industry spent more than it earned.

An annual review of how formal business sector has performed, for the year 2016, will be published in Stats SA’s Annual Financial Statistics (AFS) report. This is due for release on 15 November 2017. So watch this space!