Many of us enjoy a pint, but have you ever really thought much about the industry and what you spend on your beer?

In celebration of International Beer Day, we take a closer look at how much households spend on beer and how the price of your favourite brew has shifted over the last while.

Beer has remained relatively flat (in terms of price, hopefully not your actual beer!) Beer inflation – for both rural and urban areas – climbed 0,3% in June 2017 compared with June 2016, way below the overall annual inflation rate of 5,0%.

Beer drinkers living in Western Cape have it a bit tougher than those enjoying a glass elsewhere. The average price of a 330 ml bottle or can in Western Cape was R13,77 in June 2017, R3,77 more expensive than that recorded for Free State, where beer was the cheapest.

How much do South African households spend on the beverage? The consumer inflation weights published by Stats SA in December 2016 (for the total country) provide some insight into beer that is consumed at home. Beer accounts for 2,1% of total household spending. This is the same as what is spent on personal care (2,1%), but higher than tobacco (1,9%), vegetables (1,5%), sweets and desserts (0,7%) and fruit (0,3%).

Stats SA measures price changes for three categories of alcoholic drink: beer, wine (which includes red wine, white wine and spirit coolers) and spirits (brandy, whiskey, liqueur and vodka). Of the three, beer is the most popular. Over half of household spending (54%) on alcoholic beverages is devoted beer. Wine and spirit coolers come in second at 25% and then spirits at 21%. 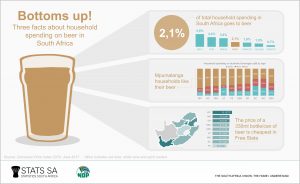