Inflation softens for a second month

Annual consumer price index (CPI) inflation registered its second monthly decline in December, edging lower to 7,2% from 7,4% in November and 7,6% in October. The monthly rate in December was 0,4%. 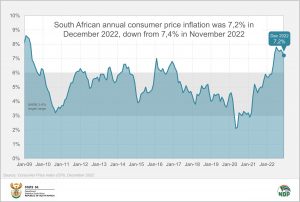 The December release concludes the results for the calendar year. Average annual inflation for 2022 was 6,9%, higher than the 4,5% recorded for 2021. The 2022 reading is the highest annual average rate since 2009 (7,1%) — the end of the global financial crisis. 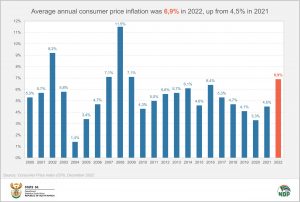 The CPI excluding food & non-alcoholic beverages (NAB) and fuel was 5,1% (year-on-year) in December 2022, unchanged from November. This is much lower than the headline rate, illustrating the impact of these two categories on overall inflation. The CPI for non-durable goods (items purchased more frequently) decreased from 12,2% in November to 11,7% in December.

Prices for food & NAB products increased on average by 12,4% over the past 12 months. Bread and cereal products have had the most significant impact on overall food inflation, with the annual rate reaching 20,6% in December. This is markedly higher than the low of 1,5% recorded in January 2022. In fact, December’s reading is the highest since February 2009 (23,8%).

Maize meal prices rose by 33,7% in the 12 months to December, with a monthly increase of 1,9%. The index for rice increased by 1,3% between November and December, taking its annual rate to 7,8%.

Oils and fats inflation cooled for the fourth consecutive month, declining to 22,4% in December.

The annual rate for hot beverages accelerated to 14,6% from 13,9% in November. Prices for instant coffee leapt by 22,9% and cappuccino sachets by 12,3% in the 12 months to December.

Annual vehicle inflation rose to 6,7%, its highest level since February 2017 (8,2%). Used vehicle prices registered an annual increase of 16,0% — the highest since the current CPI series began in 2008. New vehicles were 5,9% more expensive in December 2022 compared with December 2021.