Inflation cools for a second month

Annual consumer price inflation slowed to 7,5% in September from 7,6% in August, edging further down from the 13-year high of 7,8% recorded in July. Fuel prices declined for a second consecutive month, contributing to the softer headline rate. 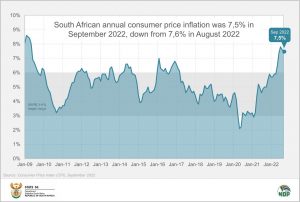 The monthly change in the consumer price index (CPI) for September was 0,1%, lower than 0,2% recorded in August.

For much of this year, inflation was mainly driven by sharp increases in food & non-alcoholic beverages (NAB) and fuel prices. The CPI excluding these two categories registered an annual increase of 4,9%, up from 4,6% in August, indicating that higher inflation has spread beyond these two groups.

Fuel prices declined by 6,4% between August and September. This slowed the annual rate to 34,1%, which is down from the high of 56,2% reported in July.

Bread & cereal and meat inflation showed a similar pattern. The annual rate for bread & cereals accelerated to a 13-year high of 19,3% in September. The monthly rate was 1,3%, softer than the 3,1% reading in August. Annual meat inflation increased from 9,2% to 9,9%, while the monthly reading slowed from 0,7% to 0,5%.

After sustained price increases during much of the year, the index for oils & fats tumbled by 6,1% between August and September. This dragged the annual rate down to 29,0% from 37,6% in August. Prices for sunflower oil decreased by 8,0% in the month, with the average price of a 750 ml bottle of cooking oil falling to R41,38 from a high of R45,33 in July. Despite this decrease, the price is still significantly higher than the R30,98 consumers paid in September 2021.

Clothing and footwear prices increased by 2,8% from September 2021, the highest annual rise since August 2017 (2,9%). Prices for accommodation services1 increased by 6,0% between August and September. This took the annual rate for accommodation services to 10,5%, the highest it has been since March 2014 (10,9%). Personal care products registered an annual rate of 8,3%, the highest since December 2009 (9,7%). The monthly increase for personal care products was 1,9%, more than double the 0,8% recorded in August.

The charts below show the products that recorded the largest percentage price increases in September. 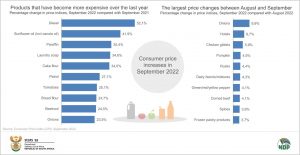