SA’s Millennials have made substantial strides in education outcomes

It is often said that each generation should be better off than their parents. In South Africa, generational changes have largely been impacted by important political changes that affected the choices available to Generation X’ers and Millennials in terms of their educational and labour market participations. 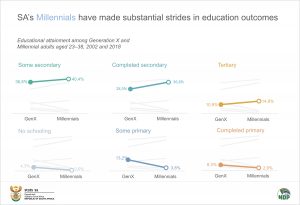 The report, which uses data from the General Household Survey (GHS) 2002 and 2018 indicates that, compared to Generation X in 2002, Millennial women in 2018 had outpaced men in secondary school completion and in achievement of tertiary qualifications.

Among Millennials, close to half (49,5%) were employed, while 23,8% were unemployed, and 26,7% were not economically active. This was close to a three-percentage-point decline from 2002 to 2018 among employed people when comparing Generation X and Millennials. Two out of ten (20,4%) employed Millennial adults aged 23–38 had a tertiary qualification in 2018, while in 2002, 15,9% of Generation X adults had a tertiary education.

The importance of attaining an education is often cited as a means of living a better life and providing a better future. Therefore, a lack of education makes it harder to succeed in life.

While Millennials were more likely to be better educated than Generation X adults and Born-free Millennials, in terms of race, close to 48% white Millennials attained a tertiary qualification, while 31,8% Indians/Asians, 11,3% coloureds and 12,6% black Africans had achieved similar qualifications in 2018.