South Africa enjoys a positive tourism trade balance with the rest of the world. What this means is that non-resident visitors spend more money in our country than South African travellers spend abroad. However, the trade balance surplus has narrowed since 2016.

In 2018, non-resident visitors1 (which includes both tourists and same-day visitors) spent a total of R120 billion within the borders of South Africa. This is according to data from the latest Tourism Satellite Account for South Africa (TSA) report. Much needed foreign currency is traded for rands, and visitors spend this on a range of tourism-related activities, such as accommodation, transport, food and recreation.

South Africans, on the other hand, offset this by taking money out of the country when they travel internationally. Every time you take out your credit card to pay for a meal at a London pub, or order an Uber ride in downtown Bangkok, you are transferring a small amount of money out of South Africa.

The total amount of money spent by South African visitors abroad was R84 billion in 2018. 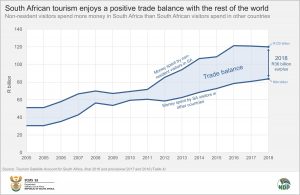 In other words, the country earns more currency from tourism-related activities than it spends in other countries. A positive tourism trade balance also has a positive impact on South Africa’s overall trade balance.

In his address to delegates at the 2019 Africa’s Travel Indaba, President Cyril Ramaphosa referred to tourism as the new gold. This was to highlight tourism’s importance in growing economies across Africa.6 According to the TSA report, tourism contributed 2,7% to South Africa’s gross domestic product (GDP) in 2018 and provided jobs for 739 657 individuals, or 4,5% of the country’s total employed. Growing the tourism sector involves a range of initiatives, one of which is to attract foreign visitors to our shores.

1 A visitor is a traveller who takes a trip to a place outside their usual environment, for less than a year, for any purpose other than to be employed at the place visited. A visitor can either be a same-day visitor, who visits a place for less than one night, or a tourist, whose trip includes an overnight stay.