The actual index level is now lower than it was in October 2018, according to Stats SA’s latest Consumer Price Index release1. This means that, on average, consumer prices in January 2019 were lower than they were in October 2018.

As motorists would have noticed, petrol prices are now lower than they were in April 2018. The petrol price (inland 95-octane) dropped by R1,23 per litre and diesel by R1,54 in January 20192. This resulted in a 10,2% monthly slump in the fuel index, the biggest monthly drop since January 2015. 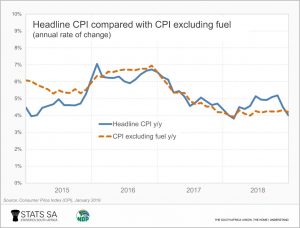 Food and non-alcoholic beverages prices increased by 1,4% in January 2019 compared with December 2018, although the annual rate remained steady at 3%. Bread and cereal products climbed by 2,6% between December and January, the highest monthly increase since March 2016 when the impact of the drought was being felt.

For the braai masters out there, the news was mixed. Year-on-year meat inflation dropped from 1,8% in December to 0,8% in January. However, meat prices went up by 1,2% month-on-month in January. There were month-on-month increases in sausages (1,9%), fresh chicken portions (1,4%) and beef steak (1,2%).

Peppers, tomatoes, sweet potatoes and rooibos tea experienced the biggest annual price rises in January. The rise in rooibos tea prices was underpinned by a lack of supply as the industry continues to recover from a four-year drought3. 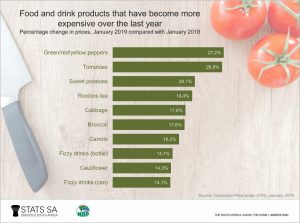 Bad news if you are a lover of cold drinks. The average price for bottled fizzy drinks climbed by 14,7% year-on-year and cans by 14,1%.

With children going back to school in January, parents are paying 7,0% more for books, newspapers and stationary than they did a year ago. However, discounts on stationery prices from December saw a monthly price decrease of 1,1%. Exercise books, including exam pads, saw a decline of 15,4%.