Energy and the poor: a municipal breakdown

In April, government reaffirmed its commitment to renewable energy. The Department of Energy signed agreements with 27 independent power producers (IPPs), effectively unlocking R56 billion that will be invested in renewable energy projects across the country, predominantly in rural areas.

Jeff Radebe, the Minister of Energy, outlined the importance of moving forward with renewable energy initiatives, arguing that lower electricity prices brought about by clean energy will help indigent households cope with the rising cost of living 1,2.

Indigent households were also the focus of Stats SA at a recent media event on the release of the latest Non-financial census of municipalities report. A lesser known fact about the report – that is relevant to government’s recommitment to renewable energy – is that it provides data on the extent to which municipalities provide off-grid energy sources to poorer households, including solar energy.

A family requires energy for three main tasks: cooking, heating and lighting. Electricity is an ideal source as it can be used to perform all these three tasks. But what if a household is located in an area that doesn’t have access to the power grid and/or doesn’t have the means to afford other forms of energy?

To what extent are municipalities providing these sources, including solar energy? Of South Africa’s 213 local and metropolitan municipalities, 49 indicated that they are servicing indigent households with at least one form of off-grid energy source5, according to the Non-financial census of municipalities report. 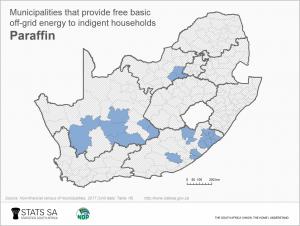 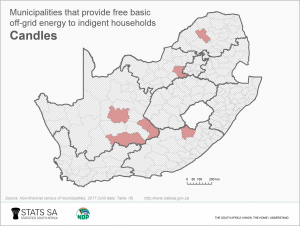 There are still households in South Africa that rely heavily on candles. Just over 5% of South Africa’s 16,6 million households use candles as a main source of lighting, according to the General Household Survey (GHS) 2016 report.6 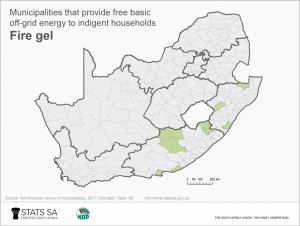 Fire gel is used as a source of free off-grid energy in 10 municipalities in Eastern Cape and KwaZulu-Natal, benefitting just over 19 600 households (0,6% of all indigent households). 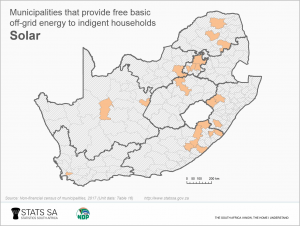 There were 22 municipalities providing free solar electricity systems. About 113 200 households (3,2% of the 3,5 million indigent households nation-wide) benefitted from this service.

It comes as no surprise that this percentage has gone up, from 2,8% in 2016. The country basks in sunshine throughout the year. The estimated figure for the annual 24-hour global solar radiation average, according to the Department of Energy, is about 220 W/m2 for South Africa. This is higher than the average recorded for Europe (100 W/m2) and parts of the USA (150 W/m2).7

In celebrating energy month in May, the Minister of Energy stated that the Department of Energy is aiming to enhance South Africa’s energy mix by increasing clean energy’s contribution to 30% by the year 2025.8 As the costs of producing photovoltaic  panels continue to decline, providing solar energy as a service to poorer households might become a more attractive option. In time, solar energy will hopefully replace candles, paraffin and fire gel.

Download the latest Non-financial census of municipalities report here. The data used to create the maps above can be found in the unit data Excel file (Tables 16 and 17), available for download here.

4 Municipalities adopt indigent support programmes to ensure that poor households (that are unable to pay for certain basic services) have access to water, electricity, sanitation and refuse removal. Households can apply for indigent status with their respective municipalities. If a household’s application is successful – if it meets specific criteria – then it receives services for free or at greatly-reduced rates.