Municipalities: where are the staff vacancies?

Recent service delivery protests have shifted the spotlight onto local government’s ability to provide vital services. Are municipalities properly staffed to handle the complexities of service delivery? Stats SA’s latest Non-financial Census of Municipalities report provides a profile of the municipal workforce, shedding light on the number of vacancies in key departments1.

Local government is responsible for ensuring that homes, businesses and industries across South Africa have access to vital services, such as electricity, water and refuse removal. Does your municipality have the staff to ensure that you receive these services? The maps below provide a snapshot2.

In the map below, municipalities with the highest vacancy rates (49% plus) are indicated in yellow. Emfuleni municipality in Gauteng (the Vereeniging area) had the highest rate: 59% of its 5 438 funded posts were unfilled. 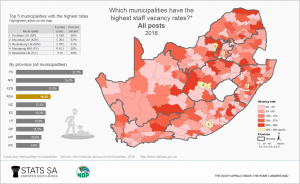 As a group, Free State municipalities had the highest percentage of posts that were unoccupied in 2016. 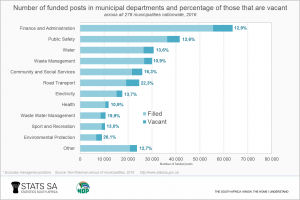 When Stats SA asked municipalities what could be the reason for staff vacancies, the following were some of the responses: (a) there was sometimes uncertainty regarding details of the personnel structure within the municipality; (b) in at least one municipality a moratorium was placed on filling of posts; and (c) many municipalities were still using outdated organograms that were due to be updated after the August 2016 local government elections.

Many municipalities rely too heavily on consultants to prepare their financial statements, according to the Auditor-General (AG). The AG reported that local government forked out R892 million in consultancy costs for financial reporting services in 2014/15, which was a rapid increase from the R267 million recorded in 2010/115. 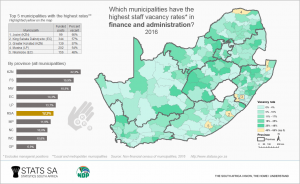 Residents in Vryheid resorted to fist fights over water earlier this year6. The drought-stricken KwaZulu-Natal town was one of many that bore the brunt of one of South Africa’s worst droughts in recent history, with the municipality resorting to bringing in tankers of water for residents’ usage.

Chronic water shortages remain a concern in many parts of the country, despite relatively good rains over the last few months. Together with the drought, loss of water due to leaking pipes and the poor maintenance of water treatment plants remain constant bug-bears of South Africa’s water infrastructure network7.

The municipal departments responsible for waste water management and water reported a combined vacancy rate of 15,2% in 2016, with Rustenburg municipality way on top at 69%. 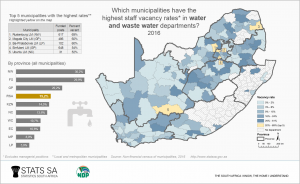 You might be wondering about those local municipalities in the map above that do not have water-related departments. The responsibility for providing water in these areas, mainly in KwaZulu-Natal and Eastern Cape, is not carried out by local municipalities but by other organisations, such as water boards or district municipalities.

Rolling power blackouts plagued South Africa in 2008 when demand for electricity outstripped supply. The country has since clawed itself back into a position of stable electricity generation.

The good news is that municipalities have done their part too, increasing staff capacity in their electricity departments. However, despite the fall in the national vacancy rate, empty seats remain a problem for municipalities in North West and Free State in particular. 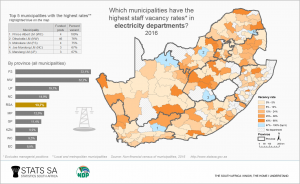 Rabelani Dagada, Johannesburg’s Finance MMC, recently announced that R1,5 billion would be spent during the 2017/18 financial year on maintenance of road infrastructure. R105 million in particular would be spent on repairing broken traffic lights within the city8.

Does Johannesburg have the human resources to transform this money into tangible results? Of the 2 508 posts available for road transport in the city, only 131 were unfilled. With 5% of posts vacant in that department, the city is in a better position to ensure that its roads are well maintained.

Other municipalities are not so lucky. Of the 24 655 road transport posts funded nationally in 2016, 5 487 (22,3%) were vacant. Almost half of available posts in road infrastructure departments were unfilled in Free State, with high vacancy rates recorded for Mangaung (74%) and Masilonyana (69%). 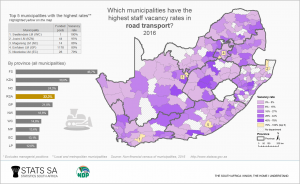 To wrap up: where should we focus our efforts then?

3 Vacancy rate, for the purposes of the NFCM, is the percentage of funded posts that are currently unfilled.