Your job, your economy, your province

Kathu has a story to tell. Located in the rural expanse of the Northern Cape, this small town owes its existence almost entirely to iron ore. The streets, the businesses that line them, and the eleven thousand people that call Kathu home, all draw their economic lifeblood from Sishen, one of the largest open-pit mines in the world.

When the global price of iron ore rose rapidly in 2010, peaking at almost US$180/tonne in April 20111, Kathu found itself – almost unexpectedly – in the midst of a local economic boom2. Khumba, the mine’s main operator, paid out a sizeable lump sum to every employee, resulting in a flurry of consumer spending. Businesses and stores mushroomed, property values rose, and for a while the town was the golden egg of the province.

Then everything changed. Just as quickly as the iron ore price had climbed, it began to drop on the back of a slowing Chinese economy, hitting a low of US$41/tonne in December 2015.

Kathu’s fortunes fell as Sishen cut back on production. Reports from 2016 paint a picture of a town that is now struggling: houses and stores stand empty, retail and property markets are stagnant, and retrenchments loom large at the mine2,3.

Mining is the largest industry in Northern Cape, the province in which Kathu is located. The graphic below also shows that it is also the most important industry in three other provinces4. 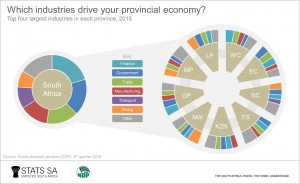 The cosmograph below, which shows the same data, provides a perspective on the size of the country’s three sectors and provincial economies. 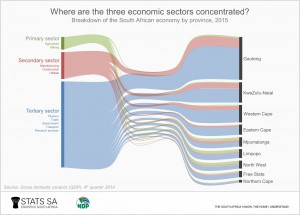 The primary sector is the smallest. Again we see mining’s influence as it contributes to this sector in Mpumalanga, Limpopo, North West and – although it’s not too clear in the graphic – Northern Cape.

The story of Kathu, as well as the graphs above, teaches us geographic scale matters when making decisions about the economy. Even though mining does not feature as one of the top four largest industries in South Africa, contributing only 8% to the national gross domestic product (GDP), it is the dominant industry in four provinces and the lifeblood of many small towns.

Shifts in the economic structure might not seem that important at a national level, but on a regional or local level they may have serious consequences for the livelihood of many people who depend on the affected industries. Of course this is not unique to South Africa; structural changes and the disruptions they generate are an economic reality the world over.

4 Interested in finding out more about your provincial economy? Provincial/regional gross domestic product (GDP) figures published by Stats SA are available in Tables 16 to 35 in the GDP_P0441_Regional_Revisions_tables_Q4_2016 Excel file available here. For national GDP figures, download the PDF release here.