The continent is working towards attaining “the Africa we want”. Key to achieving this goal, through the Sustainable Development Goals and Agenda 2063, are quality and relevant statistics.

African Statistics Day is celebrated each year on 18 November. Africa celebrates this day to raise awareness of the importance of statistics in all aspects of socioeconomic life. The theme for this year is:

This year the day champions economic statistics; however, the value of population statistics in making a difference to lives on the continent cannot be underestimated.

Population is not simply a problem of numbers. The growth in Africa’s population in the last decade has not been accompanied by the necessary structural transformation, nor has it translated into equitable human development and improved livelihoods.

Economics and population issues are deeply intertwined. A country planning for a brighter future needs to understand the linkages between population changes and economic growth. One such linkage takes the form of what is known as the demographic dividend: a period of rapid economic growth triggered by a shift in population structure.

A demographic dividend happens when a nation enters a period in which those of working age (15–64 years) begin to outnumber the young. With more individuals driving the economy and with fewer children to support, resources are freed up, allowing investments to flow into welfare, infrastructure and economic development.

The “Asian Tigers”, such as Korea, Hong Kong, Taiwan and Singapore, took advantage of this population shift that contributed to years of accelerated economic growth and rising per capita incomes.

What about South Africa? Take a close look at the two population pyramids below. Notice how South Africa’s population in 1996 is slightly more bottom heavy (i.e. younger) than in 2016? 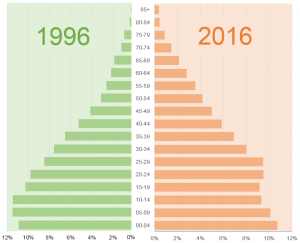 One of the reasons for this is that South Africans are having fewer babies. Falling fertility rates create the fertile ground from which the demographic dividend can emerge.

But there is a catch. Even with this population shift, the demographic dividend is not guaranteed. A second element is needed: the commitment of a country to ensure that the expanding working-age group is healthy, employable and productive. This is done by (a) ensuring that those entering the working-age group are healthy and well educated, and (b) ensuring that the economy creates sufficient employment.

A good healthcare system contributes to a productive workforce. Policies developed should invest heavily in improving infant care, child nutrition, adolescent health, and reproductive health. Education is also key. A young population that is well educated will be able to meet the demand for skills in a growing economy. Policies should be successful in improving the access to, and the quality of, primary, secondary and tertiary education.

Good governance, which includes the rule of law and initiatives to reduce corruption, builds trust amongst the population and outside investors. Sound economic policies that promote growth contribute to creating jobs that can be filled by those reaching working age.

For any nation that is on the cusp of the demographic shift mentioned above, the key question to consider is whether it is successfully laying the groundwork to transform this shift into a demographic dividend. Is it providing good quality education to its youth? Is it building an economy that will ensure large-scale employment? Both economic and demographic statistics have a major role to play in answering these questions. 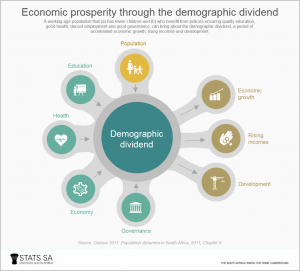 The conference brings together people from all over the world who are at varying stages of their careers, from senior researchers, practitioners and policymakers to students. It provides opportunities to network with experts in their field, showcase research and move the population debate forward. Participants will be exposed to recent scientific research on problems the world is currently facing.

Under theme 19, Population and Policy Challenges in Africa, the South African National Organising Committee will host Africa Population Day from 31 October to 1 November 2017. The eight topics to be covered are:

To be part of the change, join in the conversation and debate at the International Population Conference.