In an environment of low real economic growth, South African public-sector institutions continued to plough an increasing amount of capital expenditure into the economy in the financial year 2013/14. 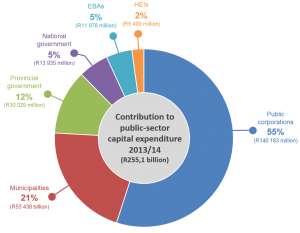 The ongoing construction of the power generation projects at Kusile and Medupi was among the largest capex expenditure during the reporting period (R49,8 billion), followed by capex of R13,4 billion for railway rolling stock, and road logistics infrastructure roll-outs (R8 billion).

The largest provincial capital expenditures for 2013/14 were: KwaZulu-Natal Transport (R3,2 billion), mainly due to the building of taxi and bus ranks in Nongoma; KwaZulu-Natal Education (R2,4 billion), mainly for replacement of ageing infrastructure, and the provision of water, sanitation and electricity to schools; and KwaZulu-Natal Health (R1,9 billion), mainly for new construction of the hospital complexes in Ngwelezane Hospital and Lower Umfolozi War Memorial Hospital. The Western Cape Transport and Public Works department spent R1,8 billion on various projects, including the resealing of roads between Calitzdorp and Oudtshoorn and between Langebaan and Velddrif.

The National Department of Water Affairs had the largest capital expenditure for 2013/14 (R3,9 billion). The investment was incurred mainly on new infrastructure as well as on maintaining and rehabilitating dysfunctional systems.

The South African Police Service spent R3,1 billion on the purchase of vehicles in order to improve the ratio of vehicle stock to the number of employed police personnel.

The National Department of Basic Education (R1,4 billion) had 11 schools in various phases of construction, and provided 1 583 schools with ICT Infrastructure.

The university of Pretoria (UP) had the largest capital expenditure (R581 million), followed by the University of South Africa (UNISA) (R460 million). UP spent R431 million on refurbishing various existing facilities, including the Old Chemistry Building and the Mamelodi campus. UNISA incurred major capital spending on computer and laboratory equipment.

Two new universities were included in this publication for the first time (Sol Plaatje and Mpumalanga), resulting in every province in South Africa having at least one higher education institution (HEI). The Sol Plaatje University expenditure was mainly on the construction of the university’s central campus (R177 million), while the Mpumalanga University spent some of their capex (R3,8 million) on new residences and laboratory equipment.