Children and the poor are most affected since COVID pandemic

For children, the ongoing COVID‑19 pandemic has significantly impacted the life they once knew. According to a recent report, the General Household Survey, 2020 which was released by Statistics South Africa, COVID-19 has had a distinct impact on the nature of child care arrangements for children aged 0–4 years in 2020.
The percentage of children that attended grade R, pre-school, nursery school, crèche, and educare centres decreased from 36,8% in 2019 to 24,2% in 2020, while the percentage of children that remained at home with a parent, guardian, other adults or children increased from 57,8% to 67,2% during the same period. 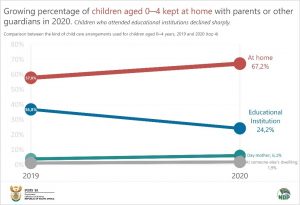 According to COVID-19 regulations, schools and educational facilities were shut down and this meant that school attendance was also negatively affected. The report shows that a much higher percentage of children aged five and six years old were not attending educational institutions in 2020 than in 2019. Five year olds who did not attend educational institutions increased from 10,9% in 2019 to 37,7% in 2020. For six year olds, the percentage increased from 3,5% to 11,8%. Although enrolment in education remained relatively high, a comparison with 2019 shows that a slightly higher percentage of children in older age groups were not attending school.

While the lockdowns and restrictions that were imposed impacted severely on peoples livelihood, social grants remained a vital safety net, particularly in the poorest provinces. The rollout of the temporary COVID-19 Social Relief of Distress grant (SRD) in 2020 played a central role in protecting individuals and households against the loss of income during this period. Nationally, 5,3% of individuals accessed the COVID-19 SRD grants in 2020. The results show that the percentage of individuals who accessed grants in 2020 increased to 34,9%, while the percentage of households that received at least one grant increased to 52,4%. It is notable that the percentage of persons that had access to at least one form of social grant decreased from 34,9% to 30,7% if the SRD grants are excluded. 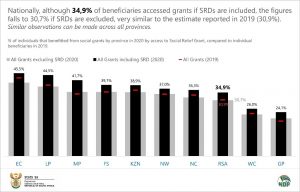 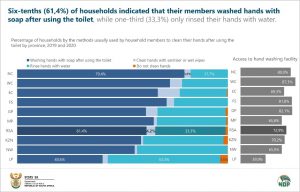 Handwashing facilities with soap and water has become a fundamental method used to prevent the spread of the virus. A comparison between 2020 and 2019 data shows that the percentage of households whose members washed their hands with soap and water after using the toilet increased from 43,6% to 61,4%, while rinsing with water decreased from 50,8% to 33,3%. It is also notable that the percentage of households whose members did not clean their hands at all decreased from 3,7% in 2019 to 1,2% in 2020.

An increase in the percentage of households that used electricity for cooking, from 57,5% in 2002 to 78,5% in 2020, was accompanied by a decrease in the use of wood (20,0% to 8,1%) and paraffin (16,1% to 3,4%) over the same period. The common use of wood and coals for cooking purposes in rural provinces such as Limpopo (37,1%) and Mpumalanga (18,9%) is, however, an indication that available resources are still very accessible and, most likely, less expensive than using electricity. 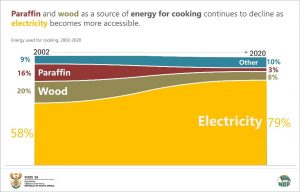 The General Household Survey (GHS) also tracks the progress of development across a wide variety of fields in South Africa such as health, housing, refuse removal and disability, as well as identifying persistent service delivery gaps.

For more information on these topics, download the full report here.