The role of EBAs in public healthcare spending

There are a small number of healthcare institutions that fall in the extra-budgetary accounts and funds (EBAs) arm of government. You may have heard of the South African Medical Research Council and the South African Health Products Regulatory Authority in media coverage of COVID-19. A recent report by Stats SA provides pre-COVID-19 financial data for these two institutions, as well as for 253 other EBAs.

Gaining insight into the state of public healthcare spending before COVID-19 provides a benchmark for when pandemic-era data eventually become available. The South African public healthcare bill was R217 billion in 2018/19, according to Stats SA’s latest Financial statistics of consolidated general government report. This translates to 12,1% of total general government spending, making it the fourth biggest expenditure item after general public services, education and social protection.1 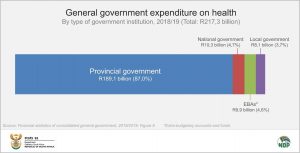 Stats SA’s most recent Financial statistics of extra-budgetary accounts and funds report provides financial detail on EBAs that are active in this space. EBAs play an important role in delivering services to government or to the public on behalf of government.3

As mentioned above, EBAs account for almost 5% of public healthcare spending. In 2018/19, this totalled R9,9 billion, rising to R11,1 billion in 2019/20. Seven EBAs are involved in healthcare. The National Health Laboratory Service accounted for R8,3 billion (75%) of the R11,1 billion in 2019/20, followed by the South African Medical Research Council (SAMRC) and the Health and Welfare Sector Education and Training Authority. 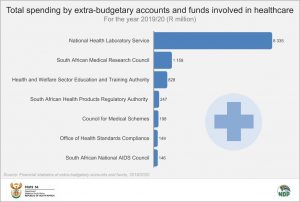 Two of the seven institutions in particular have been in the news lately for contributing to the fight against the pandemic. The South African Health Products Regulatory Authority is at the forefront, responsible for the approval of COVID-19 vaccines. The SAMRC is known for its weekly reports on excess deaths, having tracked the first, second and third waves of the pandemic.4

The full financial impact of the pandemic on the South African public health sector, in particular on specific institutions, is still to be determined. Stats SA will continue to report on the financial status of functions across government, including public health, and will provide an update when the data become available.

3 EBAs mainly rely on government funding, either via financial transfers from national and provincial government or from sales of goods and services to other government institutions. Examples of EBAs include the South African Revenue Service, the Road Accident Fund and the South African National Roads Agency (SANRAL). The release contains data for all reporting EBAs within the framework of the Government Finance Statistics Manual, 2014 (GFSM 2014).