The most important products in our ocean fishing industry

It all started with the Pieter Faure. This relatively small, unassuming ship, built in Scotland, laid the foundation for the development of South Africa’s commercial, ocean fishing industry as we know it today.

John Gilchrist might not have guessed the extent of the contribution he would make when he boarded the Pieter Faure in 1897. Commissioned by the government of the Cape Colony, Gilchrist’s job was to conduct detailed surveys of fishing grounds along the coast.

What he discovered created a great deal of excitement. There were swaths of ocean teeming with stocks of fish, most notably sole and hake, along the inshore grounds of the Agulhas Bank.

Hearing this news, a company based in Glasgow sent a trawler, the Mary, to South African shores in 1898.1 Three other trawlers commenced operations in 1899. By 1920, 12 trawlers were active in South African waters.2

The trawling industry has grown since the Pieter Faure set out on its research mission. In 2020, South Africa’s trawling fleet consisted of 51 trawlers.3,7

These trawlers, as well as many smaller players in the fishing industry, depend on a variety of fish species. Stats SA’s recently published Ocean (marine) fisheries and related services industry report provides a breakdown of which types of fish products are currently the most important.

In terms of fish that have been caught, hake generated the highest value of sales in 2019, taking up almost a third of total sales that year. Squid and anchovies came in second and third. 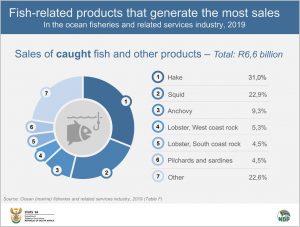 The report, which summarises a range of information collected from enterprises that are registered for VAT, includes data on processed fish. The industry generated R9,4 billion from processed products in 2019. The most popular were canned fish followed by hake. 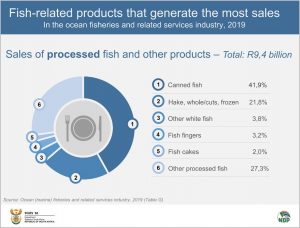 Data on the buying habits of South African households echoes the pattern above. Fish takes up 2,7% of total household expenditure on food, according to the consumer price inflation basket. If we consider fish as a category, tinned fish (excluding tuna) is the most popular product, taking up 60% total spending on fish. Hake is second, taking up 26%.4

Even though the fishing industry plays an important role in food security, it is not without its challenges. The over-exploitation of our marine resources remains a constant concern. In fact, even as Gilchrist was conducting his survey, local fishing communities were voicing concerns over the activities of the Pieter Faure and Mary; of how a growing trawling industry would deplete resources; and the negative impact that all of this would have on their ability to earn a living.

These concerns are still with us today. In a recent speech, Barbara Creecy, Minister of Forestry, Fisheries and the Environment, emphasised the dependence of local coastal communities on the ocean for their livelihood.5

Stats SA’s report shows that 16 744 people were employed across the ocean fishing industry in 2019. Almost a quarter of the workforce are casual workers. The livelihoods of all these individuals, whether permanently or temporarily employed, depend on the sustainability of this precious resource.

As for the Pieter Faure, after a few years of faithful service, the ship was decommissioned as a research vessel. It changed ownership a number of times and was scuttled in 1948.6 Next time you dig into a plate of hake and chips, take a moment to think about that little steamship, and how it changed the fishing industry into what we know today.

7 Trawlers are not the only vessels involved in ocean fishing. According to Stats SA’s report, there were 399 vessels in the ocean (marine) fisheries and related services industry in 2019.