According to the Quarterly employment statistics (QES) survey released by Statistics South Africa (Stats SA), jobs in the formal non-agricultural sector increased by 75 000 in the third quarter of 2020. This brings the total number of persons employed in the formal non-agricultural sector in South Africa to approximately 9,6 million. According to the report, formal sector jobs decreased by 616 000 in the third quarter, year on year. 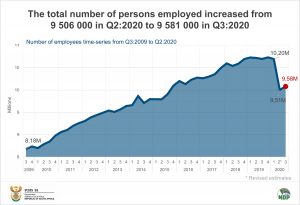 Job gains were reported by four of the eight industries in the third quarter of 2020 compared to Q2:2020. Gains were mainly due to increases in employment in the trade industry of 31 000, followed by the community services with 26 000 employees, construction industry with 21 000 employees and manufacturing industry with 8 000 employees.

Further employment losses were reported in the business services, transport and mining industries with 7 000, 5 000 and 2 000 jobs respectively. Electricity industry reported no quarterly change in employment.

Year-on-year, job losses were seen in all industries, showing a decrease of 616 000 employees in September 2020 compared with September 2019.

Gross earnings paid for the quarter ended September 2020 increased by R35,5 billion (5,5%) when compared to the previous quarter. The total amount of gross earnings estimated for the quarter was R680,0 billion. This is up from R645 billion in the previous quarter. Basic salaries/wages were up by R32,9 billion quarter-on-quarter whereas bonuses and overtime payments were up R2,6 billion. 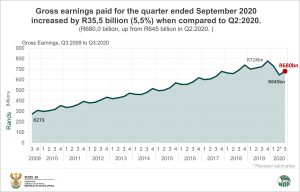 There was a year-on-year decrease of 6,1% in earnings in the current quarter compared with September 2019, amounting to R43,8 billion.

Average monthly earnings were measured at R22 579 in the formal non-agricultural sector of the economy in August 2020. This is a 5,3% increase when compared to May 2020, and an annual increase of 0,9%.