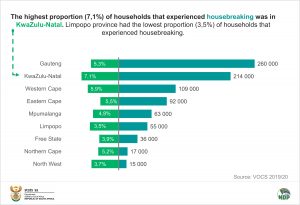 “Home robbery” is regarded as a violent crime because people are at home when it takes place as compared to “housebreaking” (burglary), which occurs when the family is away from home. An estimated 169 000 incidences of home robberies occurred, affecting 139 000 households in 2019/20. The number of affected households represents 0,8% of all households in the country. About 55% of households that experienced home robbery reported it to the police. However, home robbery has constantly declined between 2015/16 (506 000) and 2019/20 (415 000).

The second most common crime experienced by individuals during the five-year period is street robbery. Street robbery increased over the years from 697 000 in 2015/16 to 1,1 million in 2019/20. Males and persons living in the metropolitan areas were more likely to be victims of street robbery. Knives were the weapon of choice used in 47,9% of the street robberies while 34,7% used guns.