Working capital: How do municipalities fare?

How many South African municipalities are in a position to pay back short-term debt? Stats SA’s latest Financial census of municipalities report provides an answer.

One way to gauge a business or government institution’s ability to pay back short-term debt is to inspect the working capital ratio.

The working capital ratio is a financial indicator. Using data from an entity’s balance sheet, the ratio is calculated by dividing current assets by current liabilities. Current assets are those assets that can be easily liquidated within a period of a financial year, such as inventory and cash. Current liabilities include any debt that needs to be settled within a year, such as short-term loans.

A working capital ratio below one can be a warning sign for creditors and investors. It might be a sign that a business or government institution is not operating efficiently and that it may struggle to meet its debt obligations. If an entity is unable to lift the ratio to a value equal to or above one, it may eventually find itself in financial difficulty (click on the image to enlarge). 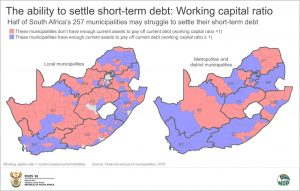 In 2019, half of all municipalities reported a working capital ratio of less than one. Free State, North West and Northern Cape had the highest proportions of municipalities falling into this category.

A municipality that consistently struggles with a low ratio might be facing a number of challenges. These can include high debt levels, decreasing sales revenues, mismanagement of inventory, or problems receiving monies owed from households and businesses using municipal services.

Even though a ratio greater than or equal to one is favourable, an excessively high working capital is not necessarily a good thing. It can indicate that a business or government institution is allowing excess cash to sit idle rather than investing it for growth. A rule of thumb states that a comfortable range for the working capital ratio is 1,2 to 2,0.

Of course, working capital is one of many financial measures that are available. To gain full insight into the financial health of a government institution or business, an analyst should explore a range of indicators. On its own, a small working capital ratio does not necessarily mean that an institution is failing.

In terms of local government, municipalities do not operate as private companies but are mostly supported by national government in the form of operational and capital grants. Many municipalities lack the capacity to generate their own revenue. Grants ensure that all municipalities have the funds to provide services.

Current initiatives, such as the adoption of public-private partnerships (PPPs), may contribute to municipalities becoming less dependent on grants from national government.1 With more revenue, municipalities can work towards lifting their working capital ratio. PPPs may currently work well for metropolitan municipalities and some local municipalities, but municipalities in predominantly rural areas still face financial challenges. They still have some way to go.

Download the latest Financial census of municipalities report here. The data within the report are verified against the annual financial statements received from municipalities as well as data from National Treasury, South African Reserve Bank, Development Bank of South Africa, and other relevant publications within or outside Stats SA. Please note that all the figures in this article are expressed in current prices.