Like many countries around the world, South Africa has faced many socio-economic challenges over the years. Emphasis has been placed on improving the lives of citizens by targeting poverty, inequality and unemployment.

A recently released report by Statistics South Africa, in partnership with Agence Francaise de Développement (AFD), Southern Africa Labour and Development Research Unit (SALDRU) and African Centre of Excellence for Inequality Research (ACEIR), the Inequality Trends in South Africa: A multidimensional diagnostic of inequality, reveals that South Africa has improved on social issues such as education, and some basic services.

The report shows that between 2002 and 2017, there were improvements regarding school-going learners aged 6–18 years. School attendance rose from 91,3% to 96,0% and problems around access to text books as reported by households dropped from 24,3% to 5,9%. The increase in school attendance was boosted by the implementation of the ‘no-fee’ policy. The percentage of learners benefiting from the ‘no-fee’ policy rose from 0,3% to 64,8% by 2017. Learners attending public schools in Limpopo, Free State and Eastern Cape were the major beneficiaries of the ‘no-fee’ policy.

Access to health care is a great concern in South Africa. A large percentage of the population depends on the public health system to provide for its health care needs. According to the report, there were very low levels of access to medical aid across all population groups, more especially among black Africans. Those residing in Limpopo, Gauteng and Western Cape were the leading provinces in terms of access to medical aid. Black African- and coloured-headed households mainly used public healthcare facilities, whereas Indian/Asian- and white-headed households used private facilities. 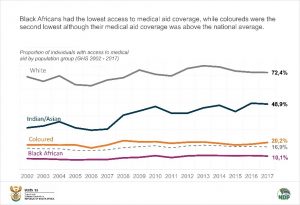 Despite continuing efforts by government to address gender inequality in SA, women have not advanced as rapidly in terms of socio-economic empowerment and gender equality. Males were consistently better off than females when looking at indicators such as literacy, earnings, expenditure shares and access to most basic services. Males consistently had higher literacy rates (95,6%) when compared to females (94,0%) in 2017. When comparing the average monthly earnings for males and females by their different education levels, it is observed that, on average, females earned less than males across all educational levels. Females with no education earned 54,4% of the income earned by their male counterparts, while females with high school or tertiary educations earned 68,2% and 63,1%, respectively, of their male counterparts’ average income. Similar to the no-education category, males with primary education earned almost double that of females with the same educational attainment, while those that had a tertiary qualification were earning almost 1,6 times more than their female counterparts. This is a good indication that there are still huge disparities in the labour market between males and females, especially in terms of earnings for comparable levels of educational attainment. 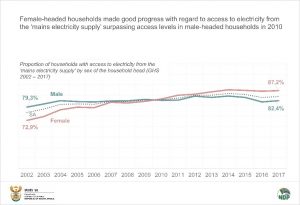 Inequality between provinces with regard to improved sanitation has declined, with Eastern Cape and Limpopo making notable gains. Rural areas saw a significant increase in improved sanitation by 40,1 percentage points from 22,7% in 2002 to 62,8% in 2017, thus reducing the gap between rural and urban areas.