Housebreaking is the number one crime in SA 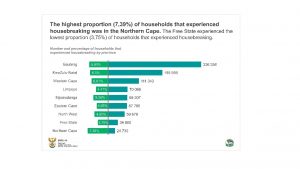 This is according to the Governance, Public Safety and Justice Survey (GPSJS) 2018/19 released by Stats SA. Data on victims of crime was previously collected through the Victims of Crime Survey (VOCS); this survey was redesigned into the GPSJS to make provision for new information on required on governance. Thus far, two reports from GPSJS have been published – one on governance themes and the other on victims of crime.

Let us look at some of the key findings of this report.

An estimated 12 000 murders were committed in 2018/19, affecting about 0,07% of households in South Africa. All affected households reported incidences of murder to the police. According to SAPS data, there were 32 000 murders during the same period. The main reason for the huge gap between GPSJS estimates of murder and SAPS statistics is that GPSJS estimates are based on murders that are known to households. The SAPS handles murders that may not be known to households such as murders of homeless people, immigrants, temporary visitors and gang-related murders.

In 2018/19 there were more or less 500 000 incidences of assault experienced by 0,7% of individuals aged 16 or above. The most likely victims of assault were males and the young. About 50% of victims of assault reported these incidences to the police. This amounted to about 140 000 individuals who reported assault to the police. The number recorded by SAPS for the same period was approximately 330 000. The lower estimate from GPSJS may be because GPSJS excludes assault of children under the age of 16.

In 2018/19 there were about 1,2 million incidences of theft of personal property affecting 2,5% of people aged 16 or older in South Africa. The most likely victims of this crime were males, white, the young, and people living in Western Cape and Gauteng. The GPSJS estimates of the number of victims who reported these incidences to the police is in agreement with SAPS data.