More than 1 million births registered in 2018

Just over 1 million births were registered in South Africa in 2018. According to the Recorded live births, 2018 report released by Statistics South Africa, this reflects an increase of 2,0% from 2017 to 2018. 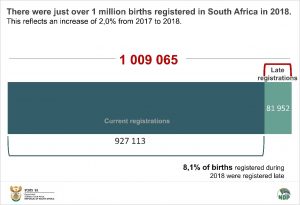 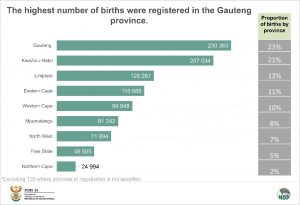 Amongst females, the three most popular first names for 2018 were Enzokuhle, Melokuhle and then Amahle. Similar to males, the order remained the same as that of 2017. For middle names amongst girls, the most popular choices were Precious, Princess and Angel, in that order. Enzokuhle, Melokuhle, Omphile and Amogelang were in the top ten list of names for both sexes. All the top ten first names for both sexes were of native languages. Most of the popular baby names for males and females reflect positive hopes for the child, express beliefs or are inspired by positive connotations of both love and acceptance.

Nationally, the most prevalent surname for both sexes was Dlamini, followed by Nkosi and then Ndlovu. It is interesting to note that nine of the surnames were from the Nguni clans, namely isiZulu, isiXhosa, isiNdebele and siSwati. Mokoena – which featured as the sixth most popular surname – was the only non-Nguni surname.