South Africa’s 123 provincial government departments spent just over R17 600 per second in the 2017/18 fiscal year. That represents a total of R557 billion over a period of 365 days. The bulk of the money flowed into provincial governments’ two main areas of responsibility: education and health.

Education took up the lion’s share. For every R100 of total spending, R41 (R230 billion) was spent on education, according to the latest Financial statistics of provincial government report. That is not surprising, as provincial governments are responsible for keeping the wheels of public education turning, most notably the administration of just over 23 700 public schools with 12,3 million learners (2016 figures).1

Pre-primary and primary schooling contributed R101 billion (44%) of the R230 billion, followed by secondary education (click on the image to enlarge). 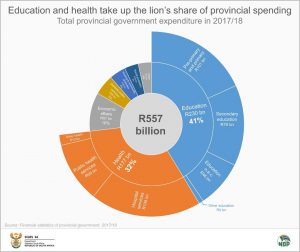 Shifting back to the chart above, health was the second biggest expenditure item for provincial government in 2017/18, taking up 32% (R177 billion) of total spending. The primary focus of spending was on hospital services, taking up R108 billion or 61% of total healthcare expenditure. The public-sector healthcare system consists of about 580 public hospitals and 3 500 public clinics and health centres, according to data from the Health Systems Trust (March 2018 figures).3

Breaking it down by province, Limpopo spent almost half (48%) of its total budget on education in 2017/18. Together with Limpopo, the more rural provinces of Eastern Cape, Mpumalanga, KwaZulu-Natal and Free State allocated over 40% of total spending to public education. 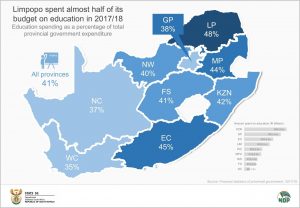 In terms of actual rand values, KwaZulu-Natal – the second most populous province in the country after Gauteng – was the biggest spender on education, totalling R49,3 billion. Gauteng was the second biggest spender, followed by Eastern Cape.

The predominantly urban provinces of Gauteng and Western Cape come to the fore with healthcare spending. Gauteng provincial government spent 37% of its budget on healthcare, and Western Cape 36%. Mpumalanga and North West had the lowest percentages. 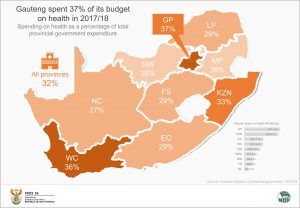