The number of consumer units using municipal bucket toilets fell from 60 557 in 2017 to 42 612 in 2018. This represents a 29,6% decrease in a single year, according to the latest Non-financial census of municipalities report.

Eastern Cape, Free State, North West and Western Cape saw a decline in bucket toilet use in 2018, according to data from South Africa’s 257 municipalities. The number edged up slightly in both Mpumalanga and Northern Cape. Gauteng, KwaZulu-Natal and Limpopo reported zero provision of bucket toilets.

Eastern Cape had the second highest number of consumer units using a bucket toilet, followed by Northern Cape (click on the map to enlarge). 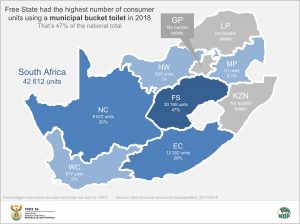 Municipalities have made a concerted effort to provide communities with better forms of sanitation. These include septic tanks, ventilated improved pit latrines (VIPs) and flush toilets.

In 2017, Nelson Mandela Bay was the municipality with the highest prevalence of bucket toilet use. It now finds itself in second place after Setsoto local municipality. 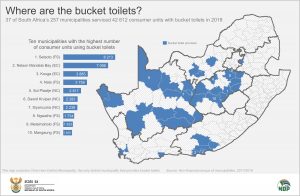 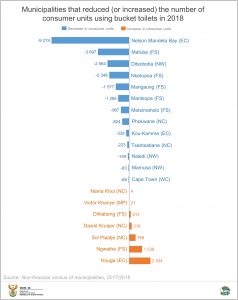 Altogether, these thirteen municipalities provided better forms of sanitation to 23 343 consumer units, making a difference to the lives of thousands of families.

Seven municipalities increased the provision of bucket toilets in 2018, by an aggregate of 5 398 consumer units. Most notably, Kouga (Eastern Cape) and Ngwathe (Free State).

Despite the country’s continued success in reducing the number of bucket toilets, many families continue to live without more adequate forms of sanitation. Stats SA will continue to monitor bucket toilet provision, reporting annually in its Non-financial census of municipalities report.

For more information, download the Non-financial census of municipalities, 2017/2018 report and unit data in Excel here.

1 A bucket toilet is a basic form of a dry toilet whereby a bucket (pail) is used to collect excreta. Usually, faeces and urine are collected together in the same bucket.

3 A consumer unit is an entity to which the service is (or would be) delivered, and which receives one bill if the service is billed, alternatively known as a delivery point. This concept is often referred to as a household by municipalities, but this is not strictly correct, as households and consumer units do not coincide one to one, particularly in blocks of flats, on stands where there are multiple households in the same dwelling, and in the case of public taps.