The Auditor-General was the largest recipient of revenue in the 2017/18 fiscal year, taking up 56% of revenue received across ten constitutional institutions. The Independent Electoral Commission was the second biggest receiver of revenue, according to data from the latest Financial statistics of extra-budgetary accounts and funds report.1 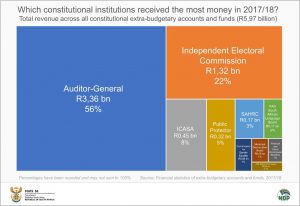 The ten institutions include, among others, the Public Protector, the South African Human Rights Commission and the Commission for Gender Equality.

This constitutional family is part of a larger group of institutions referred to as extra-budgetary accounts and funds, public-sector institutions that deliver services to the public on behalf of government. Extra-budgetary accounts and funds receive most of their revenue from national and provincial government departments. The South African Revenue Service, the South African National Roads Agency Limited and the Unemployment Insurance Fund are a few well-known examples.

There are 259 extra-budgetary accounts and funds in total, and together they received or generated R261 billion in revenue in 2017/18. Just over 2% (or R5,97 billion) of this flowed to constitutional institutions, an increase of about R186 million compared with the previous year.

While revenue increased, the ten constitutional institutions cut spending by R289 million, from R6,22 billion in 2016/17 to R5,93 billion in 2017/18. This drop was due to the Independent Electoral Commission (IEC) cutting expenditure by R825 million, driven mostly by cuts on purchases of goods and services (down by R660 million) and compensation of employees (down by R134 million). The IEC spent less in 2017/18 as this was a non-election year. Expenditure was much higher in 2016/17 due to the 2016 local government elections.2

The Auditor-General, however, saw the biggest increase in spending. The institution raised expenditure by R259 million, from R2,99 billion in 2016/17 to R3,25 billion in 2017/18. This was driven mostly by increases in compensation of employees and purchases of goods and services (mainly audit costs).

The Independent Communications Authority of South Africa (ICASA) experienced the second biggest rise in spending (up by R94 million). This was mainly due to a rise in ‘other payments’. ICASA increased its compensation of employees by R22 million, but purchases of goods and services fell by R19 million.

1 The report indicates both the economic and functional effect of spending, reflecting the extent of the cost of certain functions (e.g. health, education, social protection, defence, and public order and safety) against their economic impacts (e.g. salaries and wages).