The South African formal business sector1 generated R2,57 trillion in turnover in the fourth quarter of 2018. This translates to about R323 600 generated every second from October 2018 to December 2018.

The 5,5% rise in the fourth quarter was mostly underpinned by increased activity in trade and manufacturing, both of which are quite seasonal. The trade industry, which includes stores and supermarkets, saw its turnover climb by 6,3% on the back of increased consumer spending over the festive period. The production of beverages and motor vehicle parts contributed to higher turnover in the manufacturing industry. 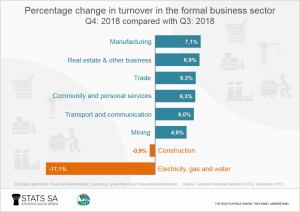 The two industries that contracted in the fourth quarter were construction and electricity, gas and water supply. Construction’s 0,9% fall in turnover coincides with the industry entering recession, according to recent gross domestic product (GDP) data.2

Total spending in the formal business sector amounted to R2,55 trillion in the fourth quarter of 2018, which is an increase of 5,1% compared with the third quarter of 2018.

The largest expenditure items were purchases, taking up 60,5% of total spending, followed by employment costs (14,5%). Expenditure items such as interest on debt, royalties, hiring of vehicles and machinery, and renting of buildings contributed 9,9%. A miscellaneous category, referred to as “other expenditure”, contributed 15,1%.