The South African economy grew by 1,4%1 in the fourth quarter of 2018, contributing to an overall growth rate of 0,8% for the entire year. The latest set of gross domestic product (GDP) figures released by Stats SA provides an overview of economic performance in 2018.

South Africa found itself in economic recession in 2018, its second since the early 1990s. The 2018 recession spanned the first two quarters of the year, with the economy shrinking by 2,7% in the first quarter and contracting further by 0,5% in the second. 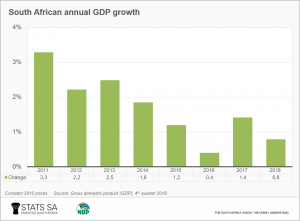 The finance, real estate and business services industry was a strong supporter of overall growth in 2018, increasing by 1,8% during the year. The second largest contributor to positive growth was government, which expanded by 1,3%. These two industries contributed 0,4 and 0,2 of a percentage point to the overall growth. 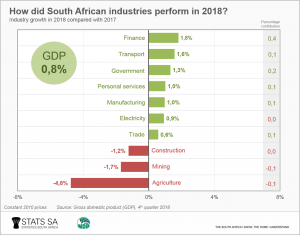 Agriculture, mining and construction all stumbled, however. Agriculture in particular had a difficult year, registering a contraction of 4,8%. A slowdown in the production of field crops and horticultural products stunted growth in the first two quarters.

Mining activity fell by 1,7%. Gold, copper and iron ore were the biggest drags on production in 2018, according to Stats SA’s Mining: Production and sales release. Gold production fell by 14,5% in 2018, the biggest annual slump since 2008. Copper production tumbled by 28,5% in the same year, the biggest fall on record since 1981, the year Stats SA started publishing the current series of monthly mining data.2

The construction industry had its worst year in two decades in 2018, according to the GDP figures. Production slumped by 1,2%, the industry’s biggest annual fall since 1999, when activity fell by 1,4%. The industry has struggled to keep its head above water, experiencing its second consecutive year of economic decline in 2018.

The mining and construction industries are in recession. Both industries recorded negative growth in the third and fourth quarters of 2018.

Key facts from the GDP release for the fourth quarter 2018:

1 All quarterly growth rates mentioned are quarter-on-quarter, seasonally adjusted and annualised, and in real (volume) terms.