Manufacturing: winners and losers of 2018

The manufacturing industry rebounded in 2018, recording its highest annual growth rate in five years. The food and beverages and automotive divisions were the major drivers behind the rise. However, manufacturers in communication equipment, electrical machinery and clothing failed to perform.

Manufacturing production increased by 1,2% in 2018 compared with 2017, according to Stats SA’s latest Manufacturing: Production and sales release1. This follows a 0,5% contraction in 2017 which had come after a rise of 0,7% in 2016 (click on the chart to enlarge). Manufacturing’s rebound in 2018 helped lift the country out of recession in the third quarter of the year2. 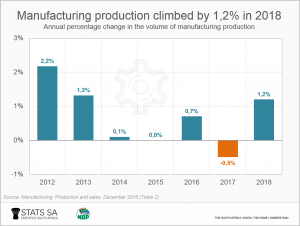 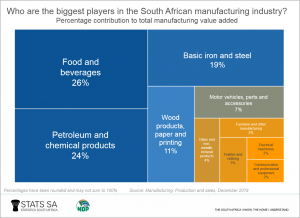 According to the chart below, five of the ten manufacturing divisions increased production in 2018. The motor vehicles, parts and accessories division was the top performer, growing by 4,9%. 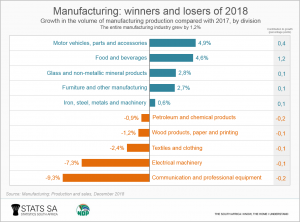 Within this division, factories involved in the production of vehicle accessories had the most to celebrate, enjoying a 9,2% rise in activity. Motor vehicle manufacturing was the other notable mover. After two consecutive years of decline, motor vehicle production bounced back in 2018 with a 3,5% growth rate. This is good news for automotive manufacturers based primarily in the provinces of Eastern Cape and Gauteng.

South African factories that performed poorly in 2018 include those involved in the production of communication equipment, electrical machinery, textiles and clothing, wood and paper, and petroleum and chemical products.

Textiles and clothing experienced its fourth consecutive year of production decline, contracting by 2,4% in 2018. Manufacturers in wearing apparel products had a particularly disappointing 2018, recording a 4,9% drop in production. Leather products and textiles didn’t do too well either, falling by 3,9% and 3,3% respectively.

Not only does manufacturing play an important role in the national economy, but it’s also an important source of employment, providing work for one in every ten individuals in South Africa’s workforce. If manufacturing gains momentum, it will bode well for its workforce of 1,7 million people4, as well as for the country as a whole.