It might sound like an anecdote from a reminiscing grandparent, that there was a time you could completely fill your petrol tank (45 litres) with just R270. Those good old days weren’t that long ago, actually. The price of inland 95-octane petrol fell to a low of R6,01 in January 2009 on the back of tumbling global oil prices, after reaching a high of R10,70 in July 2008.

Sadly, motorists have not seen R6 per litre prices since then. It would take 34 months for the petrol price to break through the previous July 2008 high, reaching R10,77 in November 2011.1 South Africans were then forking out R485 to fill a 45-litre tank. 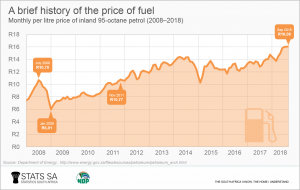 The price continued to climb, but it’s the rise in 2018 that has been particularly painful. Annual fuel inflation, which incorporates prices for all forms of fuel, was 25,3% in July 2018, according to Stats SA’s Consumer Price Index (CPI) release. In other words, motorists paid, on average, 25,3% more for fuel in July 2018 than they did in July 2017. This was the highest annual fuel inflation rate since December 2011.

The most recent CPI puts the August 2018 rate at a slightly lower 23,6%.2 In September 2018, the price of inland 95-octane petrol inched higher to an all-time high of R16,08 per litre. The usual culprits of rising international oil prices and a softening rand are largely to blame.

Rising fuel prices impacts all of us, but possibly in slightly different ways. Households in Western Cape and Gauteng spend more on private transport than on public transport, according to the consumer inflation weights published in 2016. Private transport includes spending on fuel and other running costs such as maintenance, licence and registration fees, and toll fees. Those of us who have the privilege of owning a vehicle are more likely to feel the direct impact when we fill up at the pump. 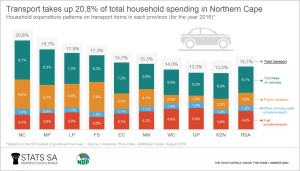 Households in the Free State, Northern Cape, Mpumalanga and Limpopo dedicate more of their travel budgets to public transport (7,0%, 6,9%, 5,7% and 5,6%, respectively). Households that are more dependent on buses and taxis for transport are more likely to feel the financial strain of rising fares.

Indirectly, all consumers will be affected as the other goods and services they purchase increase in price to reflect the underlying increase in production costs.

The pain is set to continue. The government’s capping of fuel price rises in September to give road users some reprieve was a once-off initiative. Energy Minister Jeff Radebe recently warned that prices would most likely continue to climb.3 Expectations are that the petrol price could break the R17 mark in October – a new all-time high.

With our wallets feeling much lighter, we wait with bated breath.